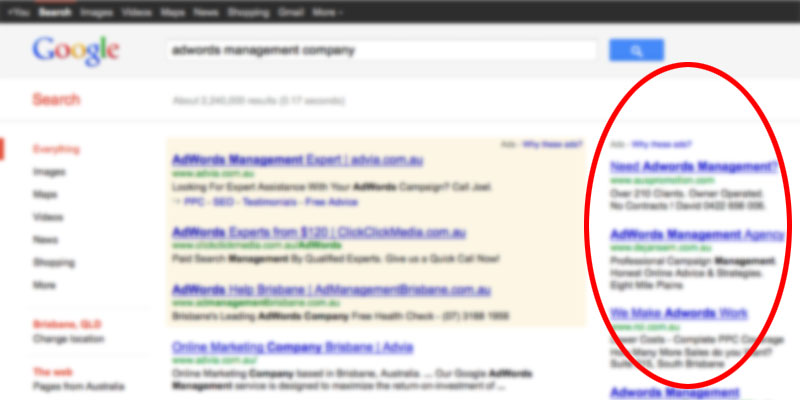 On 19th February 2016, Google announced that desktop SERPs will no longer show text ads in the right sidebar. This is true for Google and Google search partners as well. Instead, the three ads that are shown in the mainline area above the organic listings will be increased to four in case of highly commercial queries, and three text ads will be shown at the bottom of the page. So now, the total number of text ads appearing on a SERP will be reduced from eleven to seven. Now, the right rail will show product listing ad blocks and Knowledge Panels on relevant queries. Why this change has been made and how it will affect advertisers in terms of search engine marketing is yet to be known.

This sudden change has surely come as a shock but, this change is actually not sudden. Google has been testing variations of this theme for quite some years now. Google first started experimenting with four ads above the organic listings in 2010 on mortgage queries. Last year, that is in 2015, four ads started appearing on other queries too and sidebar ads started disappearing. Google had then said that these tests were not permanent and was running only on a small number of queries. But, this Friday the truth was revealed!

Google has been experimenting several ad tests in Knowledge Panels too and says that it will continue to do so. It began the tests in 2013 on car queries and expanded the tests to music, movies and books in 2014. Removing the right sidebar ads will have no effect in Knowledge Panels, says Google. The company also says that it will keep experimenting with Product Listing Ad layouts too, the most recent one being an expandable PLA block which displayed 16 PLAs above the fold when expanded.

The next question that arises is how this change will affect PPC marketing campaigns of advertisers. You may say that the number of ads to be displayed on the page has reduced, which will lead to higher prices because of lower supply and higher demand. It’s undoubtedly true but, there is a whole lot of puzzlement on this subject matter. One major question is whether advertisers will be willing to bid the same for ads that will be placed at the bottom of the page as they have been bidding for the right sidebar space. Some experts say that more impression volume for ads at the top of the page may restrain CPCs for top spaces, while others disagree with the point. There is a lot of debate on this topic, which will only be confirmed when more information becomes available on this subject. But, it is definite that advertisers bidding on ad positions will make changes. This will certainly fluctuate the auction patterns in the near future.