How Should Web Designers and Developers Work As A Team?

Home → Website Designing → How Should Web Designers and Developers Work As A Team? 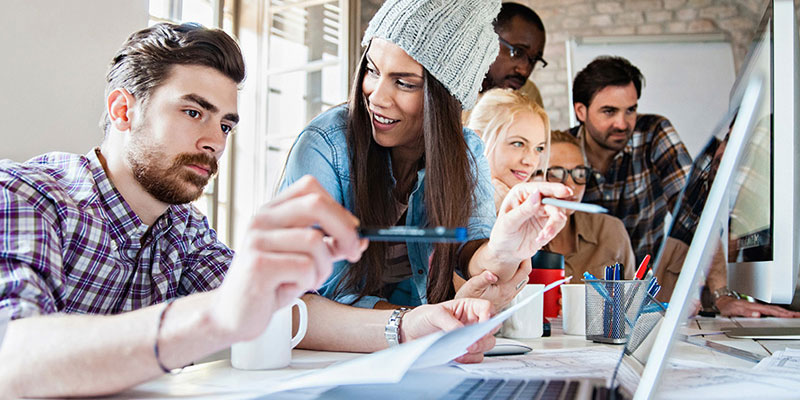 But, even after the work is divided, it is important that the two teams work together. It is necessary that they both have an understanding of what the other needs to do, and they must be able to guide and support each other down the path. It may get difficult to keep both the teams in harmony with each other if it is a large group. Here are a few things you can work on to maintain the unity and co-operation between the two teams.

Once you have a project in hand, let your employees work individually over it to bring in different ideas for the success of the project. Now, let them come up together with their ideas and have a short planning session, where they can comfortably share their ideas and offer feedback on other’s opinions. Generally, it will be required that the designers decide upon their plan first. Without a finalized design, the developers won’t be able to work much. It is also advisable to have everything in written so that everybody on the project knows how things are to be worked upon. You can get the best web developers and web designers in India, the IT hub of the country.

It is important to understand that designers and developers have very different ways of working. The thought process for both is quite different. Designers think only about the display, design, colours and visual appeal. On the other hand, developers think about how the page will work depending on the links and navigation. These are two very different ideas, which need to be crafted well together to bring out a wonderful project. It is possible that the developers cannot work on the design provided to them by the designers due to technical reasons, which will require changes in the design. Here, the designers need to understand the issue and try to find out an alternative.

The most important thing while working on a single project is that designers and developers have respect as well as trust for each other. They need to know that each one of them knows their work well and will work for the betterment of the project. They also need to have basic knowledge of what the other is working on. Designers should understand basic development concepts like functions involved and limitations of coding, while developers need to understand user experience and visual design principles.

Engagement throughout the process

It is often considered that once the designers have given their take on how they want the website to look, their work is done. It is then only the developers who need to work upon the project to see that everything functions properly. This is completely impractical. In fact, you need to have the designers involved in every phase including testing, revision, web performance and user experience. It is possible that once the work is done and being tested, some things might not work as expected. Here, there will be changes required. So, it is essential that the designers are present to take care of any changes needed in the design of the site for it to function better. It is quite possible that any of the two teams might require mid-way changes. So, the other should understand the reason, value the decision and work towards it.

You might have understood that the most important thing you require for your teams to work well is excellent communication and understanding. You need to create the best relationships between your teams if you want a successful project. Together they need to work and also resolve issues if any. For this, it is necessary that there is complete transparency about every process involved in the building of the project so that none of the team members feels neglected.

Whether you are looking for the best web designing company or a leading web development company in India, Jain Technosoft is one such name who can take care of both the tasks for you. We have a team of qualified web designers and web developers in India, who have been working together in harmony since many years to bring out the most successful web projects for local as well as international clients.