Google AdWords Is Being Redesigned After Eight Years 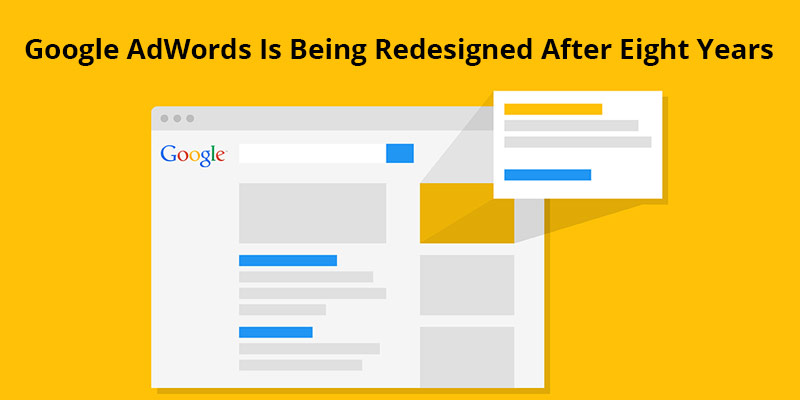 Google made $74 billion last year, and a majority of this revenue came from advertisements! This is why Google AdWords is one of its most important products, which lets millions of businesses manage keyword-driven ad campaigns across the search engine.

Over the 15 years that AdWords has been built, there has been a fundamental change in the way people search for things. They use multiple devices for surfing the Web. Today, they visit more websites, watch more videos and use more apps than ever before! Users expect ads to be helpful and relevant in every way – showing product details, providing a phone number for making an instant call, showing directions to the nearest store and more.

Greg Rosenberg, head of UX, advertiser platform at Google confirms that “AdWords started with 350 customers 15 years ago. It was rewritten 8 years ago as search advertising became really important for marketers. But it was built for a desktop search world.” After 2008, it has never seen any alteration. But, on Monday (28.3.2016) Google announced the redesign of its AdWords interface to support changes in consumer search behavior and shift to mobile screens. Rosenberg says, “Today, we’re in the middle of the biggest shift the ad industry has seen since AdWords launched—mobile.”

What does Paul Feng have to say about the change?

Paul Feng, AdWords product management director stated, “The reason we’re rebuilding AdWords is because the world has changed so much in the past two years. AdWords is now over 15 years old and launched when Google was just figuring out what search advertising was. We rebuilt it several years ago for a desktop world — smartphones were only [a] year old. Now we are in probably the biggest shift since AdWords was introduced (and I’d argue perhaps ever) with mobile. And there is now increased demand on marketers and on AdWords as a platform — advertisers are running ads in search, display, shopping, mobile, video. Ultimately, that’s why we’re re-imagining AdWords.”

Feng also confirmed that the redesign has been brought about after speaking to advertisers about what they felt. Three common arguments came up. Firstly, advertisers felt that AdWords has been built around products and features rather than the needs of the marketers. Secondly, the platform has become complex with hundreds of new features been stacked up every year. And thirdly, the design now seems outdated.

What are the changes to be seen?

Before moving towards the changes, it must be noted that there will be no change in the functionality. The redesign will not be affecting the structures of campaigns in any way. This redesign is only being changed to be updated with a mobile-first and multi-screen world. Most importantly, the design has been optimized to reduce clutter and improve workflows. AdWords will incorporate Material Design to have it updated with other Google apps like Maps, Search and Gmail.

The redesign will be functioning better for advertisers by making it much easier to execute and optimize campaigns based on a unique marketing objective. Google wants everything to support the way advertisers think about their business – from the way they express business goals to the way they measure and manage their ads.

The campaigns and ad groups will be shown in the left-hand navigation just like they are shown at present. But, when an individual campaign is clicked, it will bring up a dashboard view that Google calls as “Overview” screen. This will be available for all campaigns, ad groups and ad levels. This will be a more narrowly focused and easier-to-read version of the account-level Home screen in AdWords. It will now show only the advertiser information relevant to the types of campaigns the advertiser runs.

How long will this redesign take to roll out?

Paul Feng said, “This re-imagining process is going to take some time, but we’re excited to finally talk about what we’ve been working on for the past year, year and a half.” However, it is expected that certain areas of the redesign will roll out to selected advertisers for testing and feedback over the next 12 to 18 months. Advertisers running video campaigns will see video campaign management views; those running shopping campaigns will see that area of the platform; and so on. The redesign is expected to fully roll out to all the users by the end of the year 2017.